Home / Blog / The 5 Best Card Games for a Girls’ Night In
Previous Post
Gin Rummy History: The Bakers to Gin Rummy Super
Next Post
The Psychology Behind the Most Successful Card Players 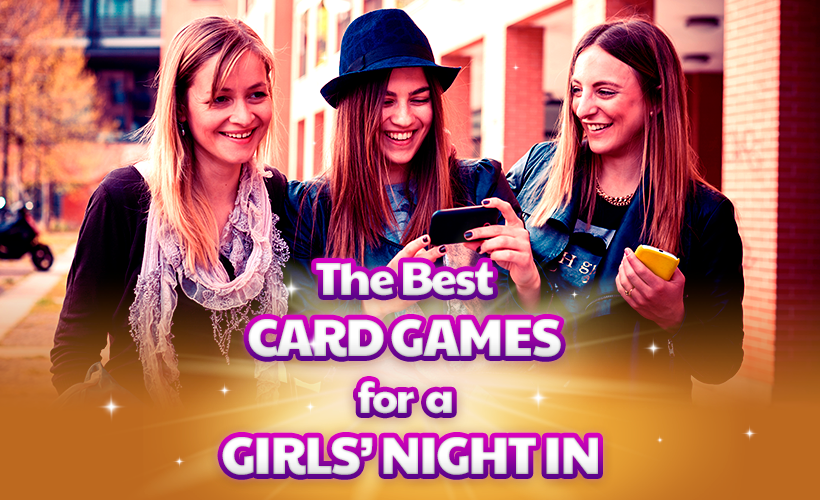 With summer coming to a close for another year, now is the perfect time to dust off your pack of cards and invite your favorite girl friends over for a night in. Let’s take a look at some of the best card games for a girls’ night in:

Black Jack, as opposed to Blackjack (where you’re supposed to get as close to 21 as possible), is a great game for a night in. The aim of the game is to shed all cards before any of the other players do.

Blackjack is played with a standard 52-card deck.

The action cards are the following:

Two: Next player picks up two cards, unless they can play a Two themselves, which would then result in the next player

Eight: Next player misses their turn

Black Jack: Next player has to pick up five cards. A second Black Jack sees the next player pick up ten cards.

Queen: You can follow with a card of any suit

King: Reverses the order of play

Each player gets seven cards. The remaining cards from the deck are placed face-down in a pile, except for the top card, which is placed face-up and used as a starter card.

The first player lays a card on the starter card, and their card must match the starter card in either suit or rank. If matching suit or rank is not possible, the player takes a card from the stock pile. The player continues to lay down cards in sequence until they cannot go anymore, or until they lay an action card. To win, a player must call “last cards” when it’s possible for them to shed their last card on their next turn. If they forget, they have to draw another card.

This simple plain-trick game is often played as a children’s game, but there are several tactics that can be employed to make things interesting. In the UK, it’s called Knockout Whist or Trumps, whereas in North America, it’s known as Scrounge or Rat. The aim of the game is to be the last payer still “standing” at the end, with the object of each round being to win a majority of tricks.

Knockout Whist is played with a standard 52-card deck of cards, and the four suits are ranked from high to low. Up to seven players can play the game.

One of the players deals, dealing seven cards to each player in a clockwise direction. The uppermost of the undealt cards is placed face-upwards and used to indicate the trump suit.

After the cards have been dealt, it’s the player to the dealer’s left that leads to the first trick. Ideally, the next player follows suit, but if they can’t, they can play any card. A trick is won by the highest trump card in it, otherwise by the highest card of the suit led. The winner of a trick leads to the next trick.

When all cards are played, players without any tricks won are eliminated. The player who wins the most tricks picks the trump suit for the next hand. If two people have the same amount of tricks, the cards should be cut to decide. The number of dealt cards goes down by one during each hand until only one player – the winner – remains.

Oh Hell, which is also called referred to as Oh Pshaw, Oh Well, Blackout or Blob, is a trick-taking game in which the goal is for a player to bid the exact number of tricks that they believe they will make. If they happen to take more or fewer tricks than they bid, then that counts as a loss.

Oh Hell is played with a standard 52-card deck of cards. The Aces are the high cards.

Each successive hand is played with one fewer card. After a hand has been dealt, the next card is turned up, and the suit it is from becomes the trump suit. At this point, each player bids for the number of tricks they think they can win. The player to the left of the dealer starts player. Each player must follow the suit led if possible. If not, they can play another card, including the trump card.

Palace, which is also known as Castle or Shed (and another rude name which we won’t mention here), is a card game which involves shedding cards to win. It is a fast-paced game, so you can play multiple hands in a single sitting.

A standard 52-card deck is used to play Palace, with the Aces being the high cards.

Each player receives nine cards. Three of these are dealt face-down and are unseen, three are placed face-up and the remaining three card become a player’s hand.

If a player is unable to play due to the cards they hold, they must pick up the cards in the discard pile. As the game goes on, players have to draw from the stock to maintain a hand of at least three cards. When the stock is depleted, players can play their face-up cards, followed by their face-down cards. The first player to get rid of their cards is the winner. The last player with cards in their possession is the loser.