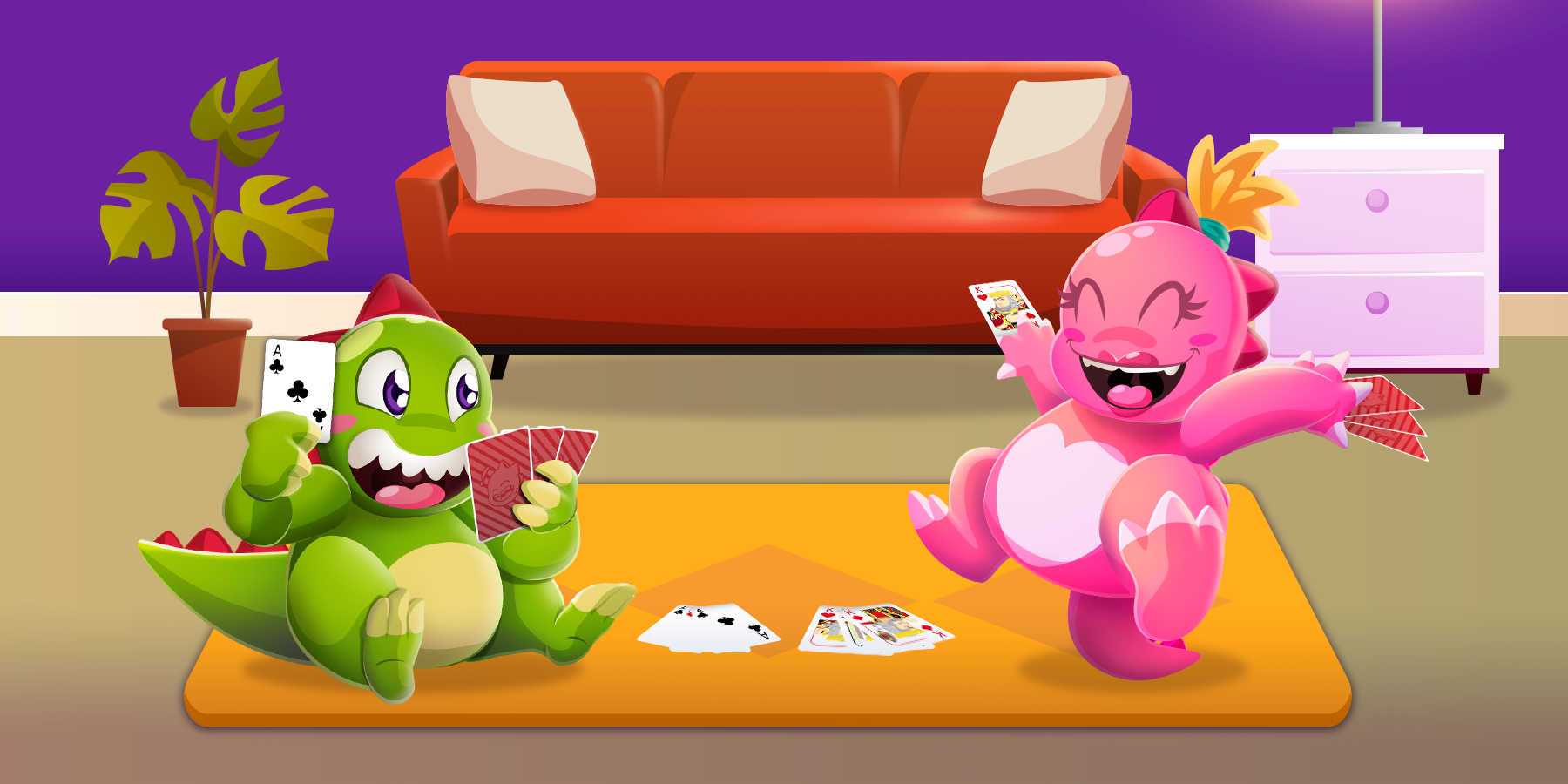 Are you all loved up with your partner and the envy of all your friends because of how perfect you seem to be for each other? Do you enjoy cosy nights in, and perhaps a card game or two with the apple of your eye? If you do, then this blog is for you! Let’s take a look at the 5 best card games for couples:

First appearing in the United States in the 1930s, when it was called Eights, the cards game became known as Crazy Eights during the 1940s in reference to US military soldiers who were discharged under Section 8 (for mental instability – times were different then. People were a little less conscientious than they are now!). Crazy Eights is more of a basic pattern of play that can be changed in a variety of ways to create a multitude of games.

A standard 52-card deck is used to play Crazy Eights.

Each other card is the pip value

All eights are wild, meaning that an eight may be played at any time in turn, and the player needs only a specific suit, but never a number. The next player must play a card from the specified suit, or an eight.

Five cards are dealt one at a time, face-down, by one of the two players. The remainder of the pack of cards is placed at the center of the table, face-down, and this pile is used as the stock. The dealing player turns up the top card and places it in a separate pile, and this card is known as the starter. The only exception to this is if an eight is drawn – an eight is immediately buried in the middle of the pack and the next card is turned.

The aim of the game is to be the first player to get rid of all the cards you hold.

Slapjack is played with a standard 52-card deck.

Cards are dealt face-down to each player in turn, one at a time, until all the cards have been dealt. The hands do not have to be even. Without looking at the cards, each player squares up their hand into a neat hand.

Each player lifts one card at a time from their pile, placing it face-up at the center of the table. When a jack is played to the center, the fun begins. The first player to slap their hand on the jack takes it, together with all of the cards that are beneath it. The player who wins these cards turns them face-down, places them under the pile, and shuffles to form a new, larger one.

If both players slap at a jack at the same time, it’s the player whose hand is directly on top of the jack that wins the pile. Should a player make a mistake and slap at a card that isn’t a jack, they must give ones of their cards, face-down, to the other player.

When a player has no more cards left, they remain in the game until the next jack is turned. They can slap at a pile, but if they fail to win it, they’re out.

War, which is known as Battle in the UK, is a simple card game played by two players. Its objective is to win all of the cards in the deck.

War is played with a standard 52-card deck.

The deck is divided equally between both players, so they receive 26 cards each. The cards are dealt one at a time, face-down. Any player can deal first. Each player places their stack of cards face-down in front of them.

Each player turns up a card at the same time, and the player with the higher-ranking card wins both and puts them at the bottom of their stack.

If the turned-up cards are the same rank, it is War. Each player turns up one card face-down and one card face-up. The player with the higher cards win both piles (six cards in total). If the turned-up cards happen to be of the same rank once again, each player places another card face-down and turns another face-up. The player with the high-ranking card takes all cards, and so on.

Go Fish is a card game that’s usually played by two players, but it can be played by up to five. What’s more is that it’s a short game that can be finished in between five and 15 minutes.

Go Fish is played with a standard 52-card deck of cards. Some of the cards are dealt, whereas the rest form the stock pile. The cards rank from ace (high) to two (low). The card’s suits are not important – only the card numbers are relevant, such as having two threes, two 10s, and so on.

One card is dealt to each player, face-up. The player who is dealt the lowest card is the dealer. The dealer shuffles the cards, and the other player cuts them, although it’s the dealer who actually completes the cut.

The dealer deals the cards one at a time, face-down. Each player receives seven cards, with the remainder of the pack being placed face-down on the table to form the stock.

The player who did not deal likes directly at the dealing player and says, for instance, “give me your kings”. Whichever player is calling out usually address the other player by name, and specifies the rank of card they want, from ace down to two. This is called “fishing”. The player calling out the other must have one card of the rank that they’re asking the other player for.

When this occurs, the player who’s being addressed must hand over all the cards of the requested rank. If they don’t have any, they say: “Go fish!”, and the player who made the request draws the top card of the stock, placing it in their hand.

If a player receives one or more cards of the rank they asked for, they’re entitled to ask their opponent for another card. The player can ask for a card of the same rank, or a different one. As long as the player succeeds in getting cards (or “making a catch”), their turn continues.

A player must reveal the card they “caught” to verify the catch. Should they get four of a kind, the player shows all four cards, places them on the table face-up, and plays again. If the player goes fishing without making a catch, the turn passes to the other player.

The game ends when a player wins all 13 of a kind. The winner is the player with the most sets of a kind. If a player is left without cards during the game, they may draw from the stock pile and ask for cards from the drawn card’s rank. If there are no cards left in the stock pile, they’re out of the game.